It made first appearance in Part 1. After the twins stop in The Red Blurry Mall. SwagmasterAndFriendz & PlayerUnknownFan19 meets SMG4 & tell him how she founds the shop. Then SMG4 tell him she founds previously before he lives in Mushroom Kingdom. After that, SMG4 tells him what SwagmasterAndFriendz & PlayerUnknownFan19 want to buy. Swag want to buy that port of Link Awakening while Trinity want to buy Monsters, Inc.: Scream Team before he goes home.

While shop not appearing, it appears as photo in The ROBLOX Album. 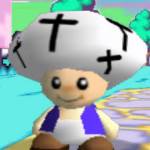